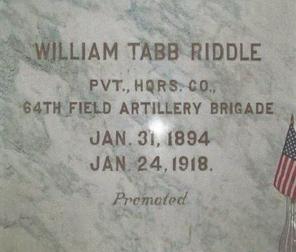 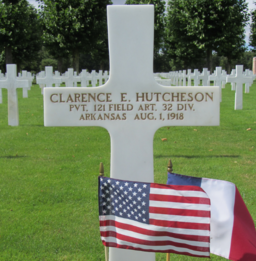 The report and description of the WWI battle around Fere-en-Tardenois, the last phase of the Chateau Thierry offensive, holds a peculiar interest to the members of The American Legion, Riddle-Hutcheson Post 77, Bentonville, AR., and the citizens of Benton County, as it was over this ground that the first of volunteer army soldiers of the Old Second Arkansas, including Company H and Company A, first got into action.

August 1, 2015 is the ninety-seventh anniversary of the battle east of Fere-en-Tardenois, France, where Clarence E. Hutcheson, the only Bentonville man killed in action, fell.  He and Mack Phillips, of Cave Springs, were in the Headquarters Company 121st Infantry, 32nd Division, when they were subjected to a bombing raid on the morning of August 1st and Hutcheson was killed in the rain of “High Explosive (HE)” shells that followed.  Both young men were in the artillery attached to the 32nd, as were other Benton County army soldiers that had originally enlisted with Company A of Springdale and became artillery organizations of this division of Michigan and Wisconsin men as replacements.  Hutcheson and Phillips were of a party that volunteered at Camp Beauregard for immediate service overseas.  Others were Roy Gentry and Dewey Rumley of Bentonville and Hugh May of Gravette, but they were scattered on their arrival on the other side.

Hutcheson and Phillips landed in France on July 27th, were sent to the front immediately, and young Hutcheson gave his life on the battlefield four days later on August 1, 1918.

The American Legion, Riddle-Hutcheson Post 77, in Bentonville is named after two WWI, Bentonville heroes – William Tabb Riddle, who died on Jan 24, 1918, at the base hospital in Camp Beauregard, La., and is interred in the Bentonville Cemetery, and Clarence E. Hutcheson, killed in action Aug 1, 1918 and is interred in the Oise-Aisne American Cemetery in Seringes-et-Nesles, France.  Both of these young men, at the age of 24 years, gave the supreme sacrifice for American freedom that we enjoy today.