There shall be no forms or class of membership except an active membership.

Sons have always assisted Legionnaires with Legion Family programs. Our Family boasts a combined total membership of nearly 4.2 million members. This year, Sons attained an all time high national membership of over 365,000. The largest Detachment, Pennsylvania, has over 61,000 members. Trophies and awards are given to Detachments and Squadrons for the largest membership and the largest increase in membership. Just as each Legion post determines the extent of its service to the community, state and nation, each S.A.L. squadron is permitted flexibility in planning programs and activities to meet its own needs. The S.A.L. has study programs recommended for younger members. One such program, called "The Ten Ideals," teaches the elements of patriotism, health, knowledge, training, honor, faith, helpfulness, courtesy, reverence and comradeship. If a member completes the Ten Ideals program, he is eligible to continue with another program called the "Five-Point Program of Service." This program covers patriotism, citizenship, discipline, leadership and legionism.

Sons focus on much more than just membership. At all levels, Sons support The American Legion in promoting a wide variety of programs. Sons assist their posts in other activities such as Veterans programs, Veterans Administration home and hospital volunteerism, Children Youth projects and fundraising. Since 1988, The Sons have raised more than $6.9 million for The American Legion Child Welfare Foundation. Members have volunteered over 1.3 million hours to date in Veterans Hospitals throughout the country and raised over $2,500,000 that has gone directly to VA hospitals and VA homes for a variety of items including TVs, radios, medical equipment and clothing for the patients.

There are many men who are members of both The American Legion and the Sons of The American Legion. Often, these individuals started out as young members of the Sons. Then, when they were old enough to serve the military, they also became eligible to join The Legion. Such individuals are known within our organization as dual members. The Sons of The American Legion is one of many organizations that sponsors and supports the Citizens Flag Alliance, a coalition formed to secure flag protection legislation through an amendment to the U.S. Constitution. S.A.L. volunteers work to establish local networks by having petitions available and handing out informational material. They alert their communities to the importance of respect for the flag and they encourage flag education programs in schools and other local organizations.

Sons of the American Legion Squadron 77

Proud possessors of a priceless heritage, we male descendants of veterans of the Great Wars, associate ourselves together as "Sons of The American Legion" for the following purposes:

To uphold and defend the Constitution of the United States of America; to maintain law and order; to foster and perpetuate a true spirit of Americanism; to preserve the memories of our former members and the association of our members and our forefathers in all wars; to inculcate a sense of individual obligation to the Community, State and Nation; to combat the autocracy of both the classes and the masses; to make right the master of might; to promote peace and good will on earth; to safeguard and transmit to posterity the principles of justice, freedom and democracy, to consecrate and sanctify our friendship by our devotion to mutual helpfulness; to adopt in letter and spirit all of the great principles for which The American Legion stands; and to assist in carrying on for God and Country. 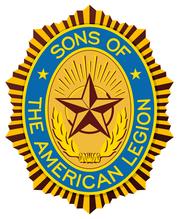